Professor Evandro Agazzi, University of Genoa, invited to a seminar room on 5 May 2004. 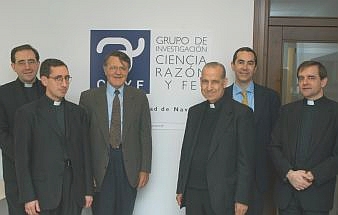 On 5 May 2004, Professor Evandro Agazzi, from the University of Genoa, was in Pamplona, invited by group. He gave a talk at seminar room with the title degree scroll Science and Faith, which was attended by almost all the members of attend group , as well as a guest from high school of Anthropology and Ethics.

Despite his entertaining explanations, we had to take a break for lunch. During lunch he told us about his work at the universities of Freiburg and Genoa, as well as about topics related to the interests of group.

After lunch, the seminar room resumed, with a colloquium, which lasted until average in the afternoon, when Professor Agazzi was due to leave.