The remote origins of the human race. Miocene hominoids

The remote origins of the human race. Miocene hominoids

From the point of view of the classification of living beings, the order of primates is divided into three suborders (Prosimii, Tarsioidea and Anthropoidea). The suborder Anthropoidea is in turn divided into three superfamilies (Ceboidea, consisting of the New World monkeys; Cercopithecoidea, consisting of the Old World monkeys) and Hominoidea, a superfamily which, in turn, is divided into three families (Hylobatidae, to which gibbons belong; Pongidae, which includes gorillas and chimpanzees; and Hominidae). The hominid family is made up of numerous genera, including the human genus, which in turn is made up of numerous species, of which only our own species survives today: Homo sapiens *(1).

Thus, from the perspective of the biological evolution of organisms, humans are descended from some form of pre-human hominid (presumably some species of gracile australopithecine or perhaps some as yet unknown species); which, in turn, evolved from some species of Late Miocene or Upper Miocene hominoid. Thus, if we want to know anything about our biological origins, we should go back to the Miocene hominoids to find out which specimen initiated the morphological and behavioural transformations that, over the course of several million years, would lead to the emergence of the human genus.

For a while it was assumed that hominoids had their phyletic origin in the late Oligocene (32-26 million years ago, henceforth: Ma.). Specifically, Aegyptopithecus (ca. 32-30 Ma.) was considered to be the Oligocene ape that could have been the precursor of the Miocene hominoids. The similarity of the dentition of Aegyptopithecus to that of representatives of the genus Proconsul supported this hypothesis. However, the fact that all the remains of Aegyptopithecus that have been found to date belong to a single site, located in the Egyptian locality of Fayum *(2), raises many doubts about the supposed ancestry of this specimen with respect to the Miocene hominoids. Indeed, this uniqueness requires extreme caution, as it is very risky to draw general conclusions from a single phenomenon: how can the characteristics of Aegyptopithecus be considered representative of the evolution of primates at this time, when it is a unique sample ? In fact, the hypothesis that Aegyptopithecus was nothing more than the local adaptation of a certain genus of oligocenic primates cannot be ruled out. On the other hand, although its dentition is older than that of Proconsul and although it is similar to that of this specimen, this is not a decisive fact for considering it to be its ancestor.

In any case, Aegyptopithecus zeuxis was a primate that could weigh about 6 kg. Several skulls have been found, as well as various bones of the postcranial skeleton corresponding to parts of the arms, feet and tail. Its dentition suggests that its per diem expenses must have been frugivorous (based on fruit consumption). We are not sure whether it moved on all fours along the branches or whether it hung from them to move from one place to another by swinging (brachiation), as orangutans or siamangs do. Apparently males were larger than females, suggesting that their social biology could imply that they lived in a harem structure formed by a group of females controlled by a dominant male or alpha male; if this were so, males would have to compete with each other to dominate a harem, hence natural selection favoured larger body and canine size for males over females, a phenomenon known as sexual dimorphism. Of course, this interpretation is based on the assumption that Aegyptopithecus zeuxis had a social biology similar to that of modern gorillas *(3), but this is not absolutely certain.

However, today it is not generally accepted that Aegyptopithecus is the Oligocene ancestor of the hominoid superfamily. In fact, it is even doubted that hominoids have their origin in any Oligocene primate species. Since the oldest known hominoid genus, Proconsul, traces its origins to the Lower Miocene, there is now a tendency to place the origin of this superfamily there.

The Miocene *(4) is the golden age of hominoids, during this period they will emerge and reach their fluorit, their splendour as an evolutionary group . For the moment, the oldest known hominoids are those belonging to the genus Proconsul. Specifically, there are five species of this genus: P. africanus, P. nyanzae, P. heseloni, P. rangwapithecus gordoni and P. major. 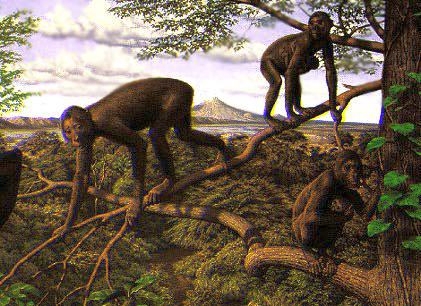 Members of this genus could range in size from 35 to 10 kg. Their mode of locomotion was quadrupedal movement over branches. It seems that the ecological environment of Proconsul was that of the tropical forest, although it would include some areas of open savannah. The sites that have yielded remains of Proconsulson: Songhor, Rusinga, Fort Ternan and Napak (the first three are in Kenya and the fourth in Uganda).

From the point of view of evolutionary relationships, we do not know who were the precursors of Proconsul. Although there are several species of Proconsulidae, it is not possible to establish any certain phylogenetic derivation from them. As far as its descendants are concerned, in the late 1980s it was considered "the last of the common ancestors of the great apes and man" *(5).

Another Lower Miocene hominoid is Morotopithecus bishopi (found at the Moroto I and II sites in Uganda), which is at least 20 Ma old. From a phylogenetic point of view they were either the ancestors of all apes or at least of the higher apes before the separation of the orangutan from the group gorillas, chimpanzees and hominids.

Explaining how the radiation of Miocene hominoids across the Old Continent from Africa occurred is extremely difficult. The same difficulties are encountered when trying to explain the transition from the African apes of the Lower Miocene to the variety of European and Asian forms that can be observed in the Middle Miocene period.

The aforementioned difficulties can be observed, for example, when it comes to establishing the plurality of hominoid forms typical of the Middle Miocene (between 16 and 10 Ma ago). Their kinship relationships are so difficult to establish that the problems in interpreting the fossils from this period have made it necessary to rewrite their evolutionary history on several occasions. Thus, according to some authors, the fossils found in Fort Ternan (Kenya) belong to Kenyapithecus wickeri, while the specimens from the sites of Ombo, Majiwa, Nayakadi, Moboko Islands and Kaloma (Uganda and Kenya) are included in the genus Equatorius. For others, however, the latter specimens would be included in the genus Kenyapithecus africanus ; while a third group would include them in the family Afropithecinae. As can be seen, the classification criteria are still far from unanimous.

The obvious fact is that in the Middle Miocene there is a radiation of hominoids from Africa to the Eurasian continent *(6) which will lead to the appearance of new forms of hominoids in the Late or Upper Miocene. Regarding the possible phylogenetic relationships between Lower, Middle and Upper Miocene hominoids, some authors recognise that: "The difficulties in understanding how the Lower Miocene apes - in the style of Proconsul - gave way to the greater variety of European and Asian forms of the Middle Miocene and to the great diversity of the Upper Miocene, have been a real challenge for primatologists for many years" *(7). Establishing these phylogenetic relationships with a high degree of certainty Degree has not yet been achieved.

In the Lower Miocene we find some hominoid genera that are relatively well documented. One of these genera is Oreopithecus. Its remains have been found at the Italian localities of Baccinello and Monte Bambolini. Oreopithecines are difficult to classify, as some dentition features have received different interpretations, in some cases bringing them closer to cercopithecoids and in others to the ancestors of hominids.

One of the latest specimens to be included is Pierolapithecus catalaunicus. It is a 13 Ma. old hominoid found at the Can Mata site in the Barcelona town of Hostalets de Pierola. Its characteristics make it a specimen of great interest, as well as the site, where new discoveries of hominoids belonging to new genera still to be determined have already been made.

In Catalonia, several sites have been found (Can Llobateres, Viladecavalls, Can Vila and Can Ponsic, in the regions of Vallés and Penedés; and in the Catalan Pyrenees, the site of El Firal) of a hominoid characteristic of the Late Miocene, the famousDriopithecus. These sites have yielded numerous fossils of this genus. The finding of a series of postcranial remains from 9.5 Ma. found at Can Llobateres and attributed to the same individual, popularly known as "Jordi" (a typical Catalan anthroponym), have led to the conclusion that the driopithecines were predominantly arboreal beings, and used brachiation as a means of locomotion.

Ouranopithecus is a hominoid found at the Macedonian sites of Ravin de la Pluie and Xirochori in northern Greece *(9). Its supraorbital torus (a bony protuberance B at the level of the eyebrow, which is supposed to protect the eyes) and dentition are reminiscent of the robust australopithecines or Pliocene paranthropes; this has led some authors to consider it as the best candidate ancestor of hominids.

The recent finding of a specimen of Ankarapithecus meteai has rehabilitated this genus of Turkish hominoids that had seen its remains lumped into the genus Sivapithecus.

Other lesser known hominoid genera include: Lufengpithecus lufengensis. Their phylogenetic interpretation is uncertain as their relationship to the other hominoid families is yet to be determined. Otavipithecus is a genus described from a jaw fragment found in a small gold mine in Namibia, which means that it is the southernmost known hominoid. Gigantopithecus is a hominoid of Chinese origin. Its very scarce remains make its taxonomy and evolutionary meaning very uncertain.

5.- The problem of the phylogeny of hominoids

What is the phylogenetic relationship between the numerous hominid species, and which Miocene hominoid species gave rise to the hominid family, which biologically includes man? These fundamental questions are still unanswered.

After this brief review of some of the best-known Miocene hominoids, we agree with Robert Boyd and Joan B. Silk when they conclude that: "the evolutionary history of the Miocene apes is poorly understood. There were many different species, and the phylogenetic relationships among them remain a mystery. We have no clear candidates for the ancestors of any modern ape, except for orangutans, which share several skull-derived features with Middle Miocene Sivapithecus. We cannot establish clear links between gorillas or chimpanzees and any Miocene ape. Again, this is not too surprising, given the paucity of the fossil record. We can be almost certain that the earliest hominids evolved from some Miocene ape subject , but we have no idea what it was" *(12). David Begun states: "We still have a lot to know. Many fossil primates are represented only by jaws and teeth; we have little or no information about their habitual posture and locomotion, brain and body size. No fossil remains of the ancestors of African anthropomorphs have yet been found. And there is a large geographical and chronological gap in the fossil record between the representatives of the earliest members of the African hominid lineage in Europe (Dryopithecus and Ouranopithecus) and the earliest African fossil hominids" *(13).

Fortunately, the fossil record is getting richer and richer, increasing year by year. But, for the moment, we still don't know which Miocene hominoid gave rise to the hominid family.

To find out more

More extensive illustrated articles by the same author can be found in the links below:

Remote origins of the human race (I). Lower Miocene Hominoids

Remote origins of the human race (III). Hominoids of the Upper Miocene

Remote origins of the human race (and IV). The problem of the phylogeny of hominoids