Priests and scientists. From Nicolas Copernicus to Georges Lemaître 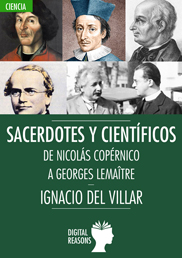 Within the collection Arguments for the 21st century of the publishing house Digital Reasons has published the book Priests and Scientists dedicated to the biography of five outstanding researchers who lived between the 16th and 20th centuries and who combined their scientific discoveries with a life dedicated to God through the priesthood: Copernicus, Steno, Spallanzani, Mendel and Lemaître, who were, respectively, the fathers of heliocentrism, geology, artificial insemination, the Genetics and the Big Bang theory.

In this book Ignacio del Villar, PhD in Telecommunications Engineering from the Public University of Navarre, adds yet another argument to dismantle the cliché that science is opposed to religion and vice versa, a cliché that, although topic has been fully overcome at the academic level for decades, is widely accepted on the street. As the author himself acknowledges in the Introduction, drawing up the final list of authors was not an easy task, not for lack of candidates but for having to discard numerous priests who, over the centuries, have made relevant contributions to scientific progress. Dedicating a chapter to each of the five scientific priests, the author narrates in an entertaining way the main events that took place in their lives, while at the same time providing us with a glimpse of the family, social and political environment and circumstances in which they lived. Undoubtedly, one aspect that stands out in all of them is their passion for knowledge, in capital letters.

One of the main arguments of the defenders of the conflict between science and Faith is that the Church has always attacked science for fear of losing its monopoly on truth. Nothing could be further from the truth. In fact, the Church played a fundamental role in the birth and development of science in the Western world. Suffice it to recall that, for centuries, the Church was the main guarantor of knowledge in Europe through the monastic schools, institutions which, together with the later palatine and cathedral schools, were the germ in the 11th century of the first universities. This is a fact little known to society: the universities, one of the main centres for the generation of knowledge in the world today, were a creation of the Catholic Church.

Nicolaus Copernicus is the first of the characters described. As the book tells us, Copernicus was a typical Renaissance man: he knew four languages, studied law and medicine at programs of study , wrote treatises on Economics and was a diplomat at different times in his life. But astronomy was undoubtedly the branch of knowledge in which this 16th century Polish monk excelled the most, writing one of the most famous works in his entire history: De revolutionibus orbium coelestium, the treatise in which, from a theoretical point of view, he addressed the possibility of the Earth revolving around the Sun, an enormous challenge as it meant drastically changing the world's view of the Universe, which had existed for centuries. On a theological level, the new theory was equally groundbreaking as it clashed with the idea described in the Bible that it was the Sun that rotated around the Earth.

Copernicus is a key figure in dismantling one of the most widespread arguments in the collective imagination about the Galileo trial. Although this was a tremendously complex process in which, for example, power struggles at the European level played a much more relevant role than the scientific ideas themselves, the message that has been transmitted to society is that the Church condemned Galileo for saying that the Earth revolved around the Sun. Suffice it to mention that Copernicus wrote his work almost a century before Galileo's trial and that the Church was fully aware of it, as attested by the fact that it was dedicated to Pope Paul III.

The biography of Nicholas Steno, the second of the characters discussed in the book, should be required reading for anyone interested in interreligious dialogue. Educated in the Protestant environment of Denmark at the time, Steno lived through a time of sad memories for Christianity: the time of the religious wars between Catholics and Protestants. However, none of this was an obstacle to his conversion to Catholicism during his stay in Italy, and he became a bishop and, over the centuries, was beatified by Saint John Paul II in 1988.

Like Copernicus, Steno was a scholar: languages, Philosophy, theology, mathematics, botany, physics, Chemistry,..., were some of the branches of knowledge in which he made significant contributions. However, it was in medicine, where he stood out for his skill with the scalpel and his anatomical knowledge and, above all, in geology, with his theory of stratigraphy, in which he defined a series of basic principles that are still valid today, that he made the main contributions to the knowledge . As with Copernican heliocentrism, this new science, Geology, represented a paradigm shift in the study of the Earth. It was no longer necessary to resort to historical documents or the Bible to understand the training of the Earth. And as with Copernicus, the publication of these new ideas was not without controversy in both scientific and religious circles.

In 1659 Steno wrote a diary in which he sets out in black and white one of the ideas that has always inspired every Catholic scientist. In this diary Steno states that "one sins against the majesty of God by being reluctant to examine the works of nature and contenting oneself with reading others. In this way one forms imaginary notions and not only does one not enjoy the pleasure of penetrating the miracles of God, but one even wastes time that should be spent on the needs and benefit of one's neighbour" (p. 51). The study of nature, understood not only as something licit but desirable in order to get to know God better, has always been present throughout the history of the Church. St. Paul (Romans 1, 19-20), St. Augustine, who introduces the concept of the Book of Nature as a complementary way to the Sacred Scripture to know God (Enarrationes in Psalmos XLV, 7) or St. John Paul II when he presents Faith and Reason as "two wings with which the human spirit soars towards the contemplation of Truth" (Fides et Ratio). (Fides et Ratio), are excellent examples of how the Church has understood that the study of creation can bring us closer to the Creator.

Lazzaro Spallanzani is perhaps the protagonist of this book less known to the general public although, like Copernicus and Steno, he excelled in numerous disciplines such as physics, mathematics, astronomy, meteorology, mineralogy, geology, volcanology, botany, Chemistry and, above all, zoology, biology and physiology. programs of study on the flight of bats, the demonstration that spontaneous generation did not really occur in nature and the performance of the first artificial insemination in history are some of Spallanzani's most outstanding achievements in these fields.

In contrast to Spallanzani, Gregor Mendel is probably the most popular of the five scientific priests that Ignacio del Villar discusses in his book. Who has not heard of the history of peas or, even in his time at high school, has not had problems with Genetics with green or yellow peas, straight or curly hair or other hereditary traits? It is surprising to see how, despite the simplicity and elegance of his laws, it took decades for academic community to realise that Mendel's laws were the basis of heredity Genetics.

In this book Ignacio del Villar invites us to travel through four centuries of European history and, through a simple and clear style, he takes us to sample the growth, both in the scientific field and in the Faith, of the protagonists. Some of them imbibed Catholicism from early childhood. Others underwent a process of conversion during their adult life. But the lives of all of them show the same patron saint: the possibility of being excellent scientists and excellent men of Faith. Their lives and their work show us that, far from being an impediment to science, the Catholic Church has been an important part of it development .

This work, written with rigour but aimed at the general public, is undoubtedly a very important piece in the fight against the prevailing scientism in our society, an ideology that tries to transmit the idea that nothing exists outside the realm of science. Ignacio del Villar sample tells us the opposite. Science and Faith add and do not subtract.