Mike Baynham, Full Professor emeritus of the University of Leeds, Ruth Breeze and Sarali Gintsburg, researchers of the group 'Public discourse' of the Institute for Culture and Society (ICS) at the University of Navarra, presented the book Narrating Migrations from Africa and the Middle East. A Spatio-Temporal Approach published by publishing house Bloomsbury. Through its 11 chapters, the book explores the narratives produced by migrants and refugees, focusing on the spatiotemporal aspects of these experiences. Researchers from universities in Germany, France, Hungary, Spain, the United States, the Netherlands and the United Kingdom have participated in the book.

Specifically, it examines how journeys to the new country and memories of home country are told from a linear as well as a multilinear and multimodal perspective of migration, i.e. how they inhabit real and digital space. The book analyzes migrants' stories about the spaces they occupy (or not) in their new communities, the spaces and times they share with locals, the different concepts of space and time, or how feelings about space and time are manifested in the narratives.

Does the book focus primarily on migrants going to the West?

Ruth Breeze: The book is about migration from Africa and the Middle East in general. Our image of this topic is usually influenced by images of people crossing the Mediterranean in small boats, but this is not the only way to migrate from these countries - not even the most common. Most migrants go to neighboring countries or other places within the same continent. Not as many people travel far, although there are more and more cases as it becomes easier.

What can destination countries, and the West in particular, learn from these narratives?

RB: To understand the phenomenon of migration, we need to understand the factors that motivate people to migrate and the great difficulties they face, not only during their journey, but also afterwards and often for the rest of their lives.

Mike Baynham: Much has been said and written about migrants and migration in the media and on research in a way that has constructed a speech where migrants are seen as outsiders, 'them' rather than 'us'. Through their stories, we learn the insider's point of view on how people have lived and live migration experiences and mobility.

Sarali Gintsburg: I think Western readers can learn a lot from this book. It's about people's life stories, about the reasons why they migrate and how they see themselves and us. This book has a double purpose: it is meant for researchers, but also for university students studying linguistics and literature, psychology, anthropology and even forensic science.

Can narratives help us to know the status of migrants? How?

SG: Clearly. I would like to mention here the chapter written by Odile Heynders (Tilburg University, The Netherlands) which offers a superb literary analysis of migrant writers of African origin now living in Europe. In her chapter, Heynders discusses the topic of 'failed' migrants, those who could not reach the destination country because they died or were killed along the way. This is a topic that we prefer not to talk about because it is not pleasant, but we should!

RB: Another case is Cati Coe's analysis of a Ghanaian woman who went in search of the American dream and ended up losing everything she had. 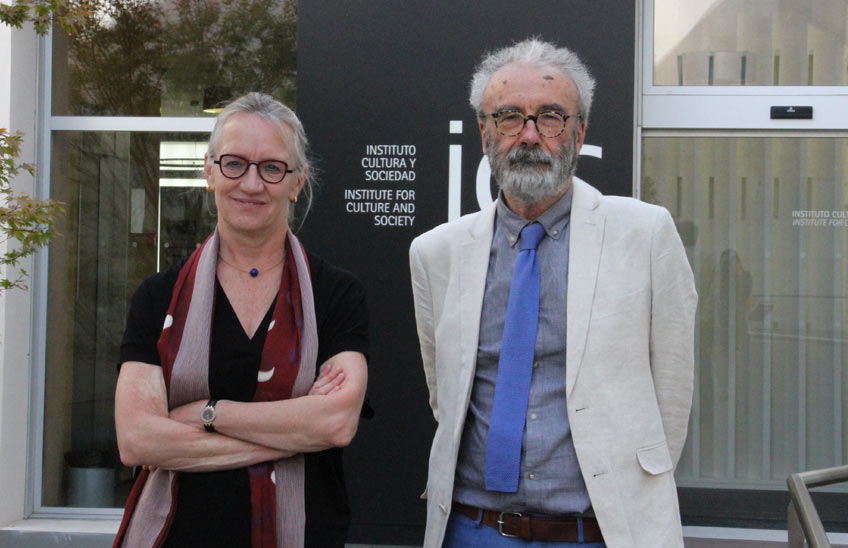 Mike Baynham, publisher, and Odile Heynders, professor at Tilburg University, during their visit to the ICS.
Photo: Natalia Rouzaut

And can they help prepare integration policies/programs?

RB: Any policy designed to facilitate integration needs to be based on an understanding of what migrants have been through and where they come from, respecting cultural differences and with a positive vision of how these 'new' people can contribute to society.

MB: The first step in developing policies and programs is to engage with those you are targeting, to listen to what they have to say. When people start talking about their lives and experiences, they start telling stories. These stories provide invaluable evidence for those who are in charge of development programs and policies.

Are the testimonies of migrants and refugees different?

SG: Yes and no. In our book we seek to present a gallery of portraits of immigrants. In it you will find writers and political activists, also war refugees and 'economic' migrants who fled civil war or famine (Ethiopia, Eritrea, Sudan Congo). In terms of language, these testimonies may be very different, but they usually try to express the same feelings and needs.

MB: There can be differences in what moves someone to leave their homes for a new country. This can range from poverty and social instability to war and lack of security. In some cases, it may be curiosity and a desire for adventure. We have a tendency to automatically associate migration with suffering but it can be a choice. Although yes, there is much in common in migration trajectories and the stories told about both migrants and refugees.

What role do feelings play?

SG: They are very important. Audiences tend to fall into two extremes: either we dehumanize what we don't understand and don't like, or we become very sentimental and therefore irrational. Life is not exactly as it is seen in movies and television, it has a great variety of plots.

Sometimes, the stories of some migrants are so unusual that we don't believe them possible. We think that no human being could survive such hardships. Other times, on the other hand, migration stories are very trivial, but this does not mean that they are not free of sentiment. Trivial stories often have a dramatic impact on our lives.

Migration stories can also be humorous. In our episode with Mike Baynham we look at a video produced by a Moroccan comedian.

MB: Stories are not only told to convey facts, but also to express feelings and assert identities. That's why we tell stories. Rational plans that do not take into account the feelings of those involved are doomed to failure. Listening to stories provides subtle or explicit clues about the sender's thoughts and feelings. This is why stories are so interesting to identity and emotion researchers and why a research like this offers lessons for those involved in developing and implementing policy.

"People who live next door to each other often live in different times and spaces."

Why are stories analyzed from a spatio-temporal perspective?

SG: Space and time are the coordinates that help us, as human beings, to define ourselves physically and mentally. Every culture and, therefore, every language, has this system of space-time coordinates implanted in it. Both concepts are closely related to each other: moving in space implies a certain amount of time and moving in time implies occupying a certain amount of space.

In our pragmatic contemporary culture, influenced by devices that measure practically everything, we see temporal movements as linear and unidirectional (we think of time as irreversible). In many cultures, however, time and space are perceived differently. In this book we review some of the most common (and relevant) work theories and approaches to time and space.

The analysis of time is seen from a multilinear perspective, how is it and how does it differ from the linear one?

RB: Migrants' trajectories are often presented to us as linear (from point A to B). However, this book highlights that people living next door often live in different times and spaces. A chapter on migrants and refugees in African countries sample how these people maintain their identities, calendars and time staff while being surrounded by people living very different rhythms. This may be the case for Christians living in Muslim countries: not only do they maintain their traditions, but they actually live in a parallel time and space, engaging with their environment only when necessary.

Moreover, people today are members of many spaces through digital participation. Moroccans living in Europe can be intimately connected to their families and hometowns through digital media. They thus participate in the social life of two very different places.

MB: Another dimension of the increasingly recognized multilinear perspective is that not only the migration story itself should be considered, but also the story of what leads to this decision, what is behind it. It is also important to consider the stories of those who do not migrate, those who are left behind. Adding these considerations makes simple linear narratives more complex.

Are digital narratives different, do they complement offline ones, do they follow the same line or are they different?

MB: Each medium of communication has its own features. Stories told orally or in writing are themselves different due to the characteristics of each. In digital media, technology makes it possible to build and share stories linked to images and videos on various platforms, moving away from the conventions of writing and orality as they have been traditionally understood.

Thus, multimodal storytelling has become commonplace in social media. These media offer unparalleled opportunities to share content instantly and across platforms, through transmediatization processes. This is quite a challenge for researchers used to working solely with spoken or written language. However, it also offers an exciting creative resource for those telling their migration stories.

SG: Good question, I wish I had the answer! Digital narratives are, in a way, immediate. They give the audience access to the story, told in real time by a real person. The multimodal perspective of digital narratives can create the impression of closeness to the storyteller, even of knowing him or her. This gives the researcher much more material to analyze.

"In the Fad surveys on youth welfare there is a population that has only known the economic crisis and precariousness."

"Addictions such as shopping, online gambling or video games are new, but there are techniques to overcome them."

The generation of quality data and multimodality, challenges of the analysis of agreement and disagreement in human interaction.