A researcher from the University participates in the mission statement Spanish team that excavates the Temple of Thutmosis III.

Inmaculada Delage, archaeologist and researcher at the University of Navarra, is part of a Spanish mission statement responsible for studying the Temple of Thutmosis III in Luxor. The goal of this group, led by archaeologist and Egyptologist Myriam Seco, is to highlight the value of this pharaoh, who reigned in Egypt between 1479 and 1425 BC and has been nicknamed the "Egyptian Napoleon".

The Spanish group is in charge of the excavation works, research, restoration and musealization of this temple, located west of the city of Luxor, and which is located on the ancient city of Thebes, capital of the great Egyptian empire.

Despite his importance in the history of Egypt, Thutmose III has gone unnoticed until relatively recently, overshadowed by other better known kings, such as Tutankhamun or Ramses II. During his reign, the ruler turned the country into a veritable empire, extending its borders from central Syria to the north of present-day Sudan, which has earned him the nickname of the "Egyptian Napoleon".

"Every day, for seven hours, I have the history of Egypt in my hands. We find religious objects, objects of daily life, constructive objects, rituals, among many other things. This gives us an insight into what life was like more than 3,500 years ago," says Delage. The interventions in the temple, one of the best examples of adobe construction of the 18th Dynasty and characterized by having been partially excavated in the mountain, have been carried out since 2008 in three-month campaigns.

"Digging here is my life's dream." 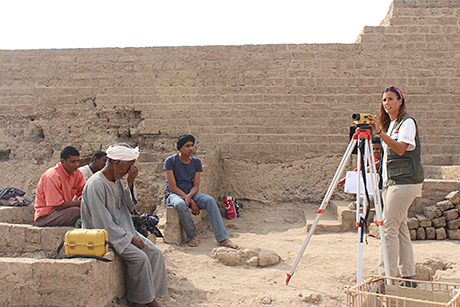 The researcher from the University of Navarra participated in the works in 2014, carrying out tasks of documentation of the iconographic corpus of the temple and, after two years, has returned to be part of the team for two months, in the current 2017 campaign. Delage has at his position two excavation areas, the first one in the chapel dedicated to the goddess Hathor, and the other in the production and storage area, which covered the different needs derived from the temple, known as Warehouses and workshops.

"This country has magic, it has a special halo that seems to remain latent. Its history is fascinating, its culture has no comparison with any other and excavating here is the dream of my life," says the archaeologist, "but not only the archaeological part makes me fall in love with Egypt every day; so do its people, smiling, friendly and welcoming. It is a country very open to foreigners, where, despite what people may think, I have always felt safe and welcome".

The University, 45th in the world in employability according to the Emerging ranking for Times Higher Education

The University is committed to training in employability with the Essentials programme.

The University is committed to training and counselling to improve employability in times of covid-19.

The University launches a programme to improve the professional profile and employability of its students.