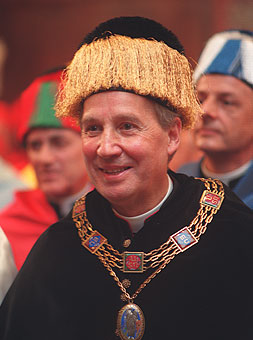 Javier Echevarría, the second successor of Saint Josemaría, was born in Madrid on 14 June 1932.

He began his primary school studies at programs of study teaching at high school of the Marianist Fathers in San Sebastián. Later, already in Madrid, he attended the high school diploma at high school of the Marist Brothers. On 8 September 1948 he asked for Admissions Office in Opus Dei. Three months earlier he had met some members of Opus Dei at the students' residency program in Diego de León Street, where he went with some companions from class who had become interested in Opus Dei as a result of a article published in a magazine. Shortly afterwards, in November, he met the Founder on a trip to Spain.

He began his Law studies at the University of Madrid ( programs of study ) and continued them in Rome. He obtained his doctorate in Canon Law from the Pontifical University of St. Thomas (1953), and in Civil Law from the Pontifical Lateran University (1955). He was ordained priest on 7 August 1955. He taught Moral Theology at the Collegio Romano della Santa Croce and at the Collegio Romano di Santa Maria. He worked closely with Saint Josemaría Escrivá, whose secretary he was from 1953 until his death in 1975. He has been a member of committee General Opus Dei since 1966.

In 1975, when Álvaro del Portillo succeeded Saint Josemaría Escrivá as head of Opus Dei, he was appointed University Secretary, position , which until then had been held by Bishop Del Portillo. In 1982, with the erection of Opus Dei as a prelature staff, he was appointed vicar general of the prelature. From 1981 he was consultant of the Congregation for the Causes of Saints; and from 1995, of the Congregation for the Clergy. After his election and appointment by John Paul II as prelate of Opus Dei on 20 April 1994, the Pope ordained him bishop on 6 January 1995 in St. Peter's Basilica.

SPEECHES AT THE UNIVERSITY

Don Javier Echevarría worked closely with Saint Josemaría Escrivá, whose secretary he was from 1953 until his death in 1975. As such, he accompanied him on his visits to campus. Since Alvaro del Portillo succeeded Saint Josemaría Escrivá as head of Opus Dei, Don Javier Echevarría continued to be his principal partner . Together with him he frequently visited the University

In January 1995, Bishop Echevarría took part in his first act as Chancellor of the University of Navarre. It was an academic act in homage to his predecessor, Don Álvaro del Portillo, the first successor of Saint Josemaría.

The celebrations for the 50th anniversary of the association de Amigos bring together more than 4,000 people at the campus . The Chancellor presides a Mass on the esplanade of the Main Library Building, recalling the Mass celebrated by St. Josemaría in 1967.

The painter Antonio López, Cardinal Péter Erdö and Full Professor Joseph Weiler are awarded Honorary Doctorates by the University of Navarra. During the ceremony, Chancellor, Bishop Javier Echevarría, advocates for an interdisciplinary dialogue that is essential for an innovative research .

Last meeting at the University

meeting After his last operation at the Clinic, Bishop Javier Echevarría would like to thank all the expressions of affection with a short visit to sports center, where the Novena of the Immaculate Conception is being celebrated.