A third of young Spaniards show signs of a lack of control over their mobile phone use, according to a University study

Just over a third (35%) of young Spaniards show signs of a lack of control when using their mobile phones. This is according to a study carried out by the Institute for Culture and Society (ICS) at the University of Navarra and financed by the la Caixa" Foundation's Social Observatory. The research relates the time spent using mobile phones and the reasons for using them with the well-being staff of young people.

The study "From moderate to hyper-connected: six profiles of mobile usage and their impact on well-being staff"is led by Charo Sádaba and Javier García-Manglano, researchers at the ICS. It defines six profiles of Username according to 11 different motivations that lead to screen consumption: moderate, organised, socialising, impetuous, escapist and hyperconnected.

According to the study, the capacity for self-control in the use of mobiles appears to be strongly associated with the motivations for using them. This control is 8% higher than average among the moderate and 5% among the organised. The moderates "use technology quite a lot, like any other young person, but less than the rest to carry out different tasks", said García Manglano. This group accounts for 42% of the young people surveyed.

At the other extreme, we find young people from profile hyperconnected, whose level of self-control is 16% lower than the general average and who resort to the phone for many tasks. In fact, more than half of the young people in the study classified in this profile (19%) reported difficulties in controlling their mobile phone use. On the other hand, socialisers, impetuous and escapists have a slightly lower level of self-control than average and use mobiles to socialise (10%), seek intense sensations (10%) or escape from their problems (9%).[i] Usage graph at the bottom

The research concludes that the ability to control one's own use of technology is an important factor in psychological well-being and staff. A clear association has been observed between the intensity with which the mobile phone is used for different tasks and the psychological discomfort of its users. In this sense, it has been shown that profiles with higher levels of screen use exhibit higher levels of anxiety, depression and stress. 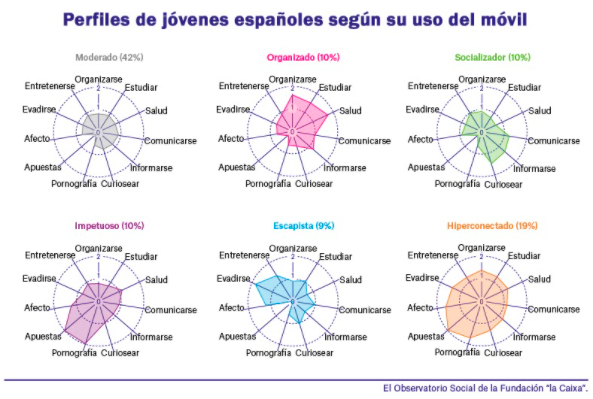 "In the Fad surveys on youth welfare there is a population that has only known the economic crisis and precariousness."

"Addictions such as shopping, online gambling or video games are new, but there are techniques to overcome them."

The generation of quality data and multimodality, challenges of the analysis of agreement and disagreement in human interaction.