Javier Bernácer, researcher of the ICS: "It is a mistake to try to understand the brain outside the mental reality".

The fourth session of the "October with Cajal" series, promoted by the Science Museum of the University of Navarra, dealt with how the brain works and the relationship between mind and brain.

Javier Bernácer, researcher of the Institute for Culture and Society of the University of Navarra (ICS), that "it is necessary to give young people the necessary tools to see reality in a different way to the current one and to know how to study the mind and the brain in a related way". For the researcher of the ICS one of the problems that exist around the research of mind and brain is that neuroscientists delve more into the diseases of the brain and not so much in the interaction with the mind and, in the case of philosophers, they lack a previous scientific knowledge . For Bernácer, the training of young people should be holistic: "It is a mistake to try to understand the brain outside the mental reality," he said.

And he said this at framework of the fourth session of the "October with Cajal" cycle entitled "Mind and Brain" -held at Civivox Iturrama and attended by more than 160 people- organized by the Science Museum of the University of Navarra to disseminate the figure of Santiago Ramón y Cajal.

The researcher also pointed out the main differences between the human brain and other animals, such as the intellectual knowledge , aspiring to an objective truth, grasping absence, and being aware of our thinking.

Also speaking at roundtable was Carmen Cavada, director of the Chair UAM-Fundación Tatiana Pérez de Guzmán el Bueno in Neurosciences, who gave an informative presentation at exhibition on the peculiarities of the human cerebral cortex. Cavada, who focused his speech on trying to explain the differences between the human brain and that of other species based on scientific programs of study , pointed out that layers 2 and 3 of the cerebral cortex have a larger neuronal body and a dendritic tree with more branches and that this is closely related to IQ. "The greater the complexity and the greater the length of the dendritic tree the higher the IQ." In addition to the level of neuronal analysis Cavada also based his explanation on gene expression and on the specialization of the cortex.

Dr. Cavada ended her speech by paraphrasing Ortega y Gasset ("Science is learned ignorance") to assure that our reality is ignorance and that little by little we are acquiring a new knowledge which is very relevant. The roundtable was moderated by José Luis Lanciego, researcher of Cima University of Navarra.

On the other hand, on Wednesday 26th, the "October with Cajal" series closed with the screening of the film "The love story with the brain, by Marian Diamond", attended by more than 120 people. 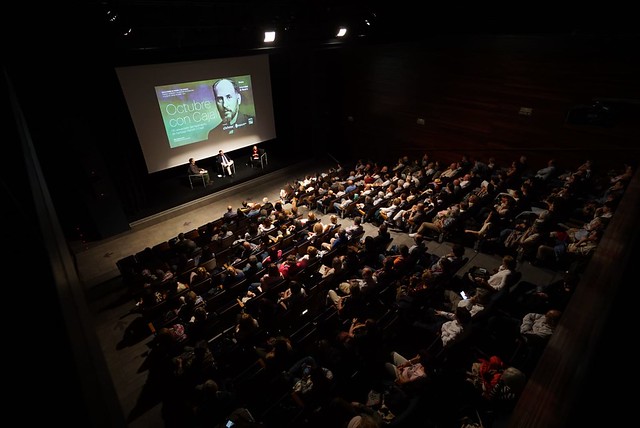 Inma Alva and Mercedes Montero at workshop "Women in the patriarchal structure of the religious space".

Javier Nanclares, professor at Civil Law: "The regulation of family institutions must be sensitive to the demands of society, but without being at the mercy of social fashions".

"Standardizing processes is essential for easy adaptation of employees."

Marian Rojas: "90% of the things we worry about never happen and yet those thoughts have a direct impact on our health".