Bishop Francisco Pérez: "We seek to be good, but we must seek to be saints".

The Archbishop of Pamplona inaugurated together with Rosalía Baena, Vice President of Students of the University of Navarra, the academic colloquium 'Echoes of sanctity. 400 years of the great canonization of 1622'.

"We seek to be good, but we must seek to be saints," said the Archbishop of Pamplona, Francisco Pérez, during the inauguration of the academic colloquium 'Echoes of Holiness. 400 years of the great canonization', organized by the Groups of research GRISO and TrentUN of the University of Navarra in the seminar room Conciliar of Pamplona.

In his message, he recalled the example of the five saints canonized in March 1622 (St. Francis Xavier, St. Ignatius of Loyola, St. Teresa of Jesus, St. Isidore Labrador and St. Philip Neri) and stressed the importance of "reflecting on holiness" because "it is the best investment": "Holiness is the patrimony of all. God never rejects".

The opening of colloquium was attended by Rosalía Baena, Vice President of Students of the University of Navarra, who expressed her wish "that the historical, spiritual and social footprint left by these five saints would continue in the new generations". Fermín Labarga, director of group of research TrentUN also participated. 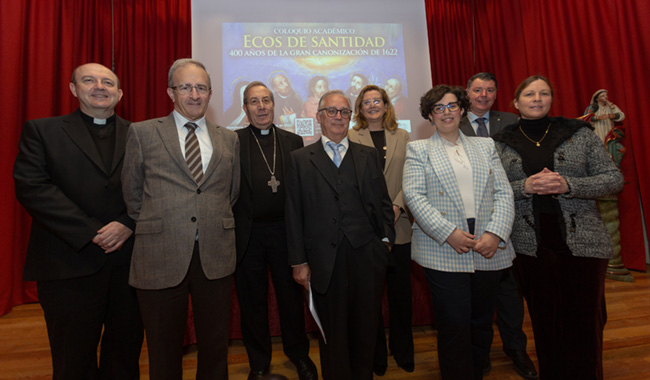 Professor Fermín Labarga was in charge of starting the first session of lectures and did so with the lecture 'The complex gestation of the great canonization of 1622'. He was followed by Ignacio Arellano, from group of research Siglo de Oro (GRISO), with a session entitled 'teaching y diversión: fiestas hagiográficas de beatificaciones y canonizaciones'; and the last lecture of the morning focused on 'Cinco santos suben a los altares: fiestas y relaciones y sucesos para la gran canonización de 1622'. It was given by María Moya, from the University of Granada.

The second session was made up of three presentations. The first of these was given by University professor Carlos Mata and was entitled degree scroll 'The saints canonized in 1622 in Spanish literature: position Some coves, from the Golden Age to the present day'; the second was given by the University professor, Javier Azanza, and focused on 'Celebrations in Madrid for the canonization of St. Isidore'; and the third, 'The portrait of Teresa of Jesus and the canonization of 1622: from hagiographies to the portraits of his disciples', was given by Esther Borrego, from the Complutense University.

The third session of lectures was opened by the professor of the University of Valladolid, Javier Burrieza; continued with the lecture 'The canonization of St. Francis Xavier', given by Luis Javier Fortún Pérez de Ciriza, of the Royal Academy of History; and concluded with the discussion paper of Ricardo Fernández Gracia, of the University of Navarra: 'The international projection of St. Francis Xavier'.

Enrique García-Máiquez assures that Chesterton detected that the heresy of the future would be a moral heresy.

The GRISO co-organises an international colloquium on Dulcinea in El Toboso (Toledo).

253 students from 44 countries are trained at the University thanks to financial aid of the CARF Foundation.