280 young people participated at the University in the first meeting of geopolitics and strategy organized by students of the academic center.

"We are in the third great transformation of humanity after the Agricultural Revolution of the Neolithic and the Industrial Revolution of the 19th century, but this one is more extensive, intense and faster than the previous ones". This was stated at the University by Emilio Lamo de Espinosa, Full Professor emeritus of Sociology at the Complutense University of Madrid and former president of the Real high school Elcano at the congress of geopolitics and strategy "Our world ahead", organized by students of the academic center.

attendance The inaugural session, held in the theater of the Museum of the University of Navarra, and which was attended by more than 280 young people from different Schools and 40 people connected remotely, was chaired by Rosalía Baena, Vice President Students, and Enrique Maya, Mayor of Pamplona. 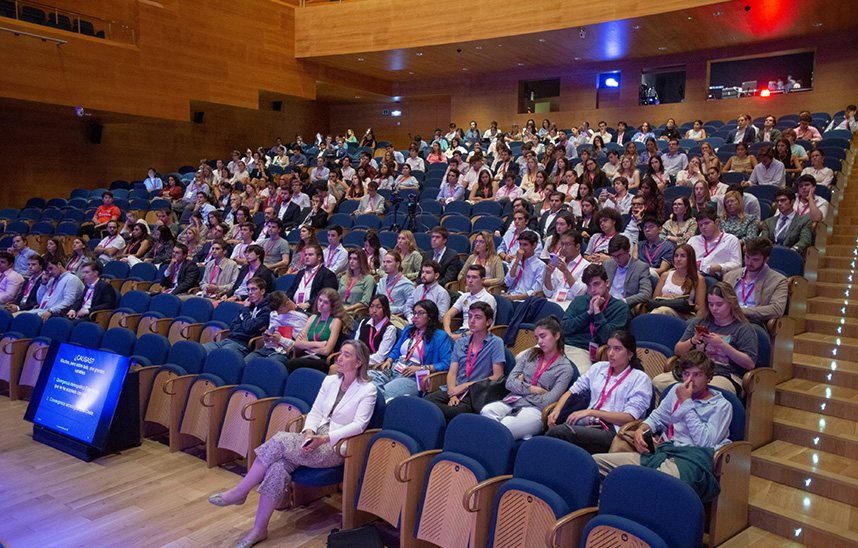 Lamo de Espinosa pointed out in his discussion paper, degree scroll "Old and New Powers", that "we are living in confusing times marked by uncertainty, where unlikely but disruptive events are accumulating, such as the Covid-19 pandemic, the outbreak of war in Ukraine or Brexit". Faced with these episodes, which he described as "historical inflections", he encouraged us to "distance ourselves from reality and approach our future from a historical perspective, analyzing the causes of its transformation, the consequences and the major players who are managing the international order".

China and the United States, the world's geopolitical vector in the coming decades

In his speech, Lamo de Espinosa also referred to the relationship between China and the United States, "the geopolitical vector that articulates the world and will continue to do so for at least a couple of decades and on whose relationship the near future depends". He also underlined the relevance of the European Union, which he described as "an enormous success and the artifact that should allow Europe to regain control of its destiny"; or the effect that the war in Ukraine has had on the geopolitical framework and on the image of NATO, which has been strengthened. On the other hand, the speaker has highlighted the absence of governance that globally addresses problems that have become deterritorialized as a result of globalization, such as Economics, politics, security, terrorism, diseases, or climate. "We have to rethink the world and the Eurocentric representation we have made of it so far," he said.

Together with Lamo de Espinosa, leading figures from the fields of politics, diplomacy, Economics and business discussed and reflected on the major issues that will shape the future of the world: Josep Piqué, former Minister of Science and Technology, Foreign Affairs and Industry and Energy of the Government of Spain; Bruno Navarro Rousseau-Dumarcet, First Sergeant of Infantry with more than 20 years of service in different Special Operations Units; and Eleonora Viezzer, professor at the University of Seville, where she develops her research in the field of nuclear fusion.

The figure of Santiago Ramón y Cajal is the focus of a roundtable organized by the University and the high school of Doctors of Navarra.

The GRISO co-organizes with other institutions the International congress "Cervantes and Don Quixote from Alcázar (literature, history, society)".

The Chair de Patrimonio y Arte Navarro, in partnership with the Friends of the Camino de Santiago, organizes conference on the heritage of Estella.

Students from the University of Navarra organize a congress on geopolitics and strategy.