Four young people from Navarra have been during the month of July in Vistabella, a village near Tecpán (Guatemala), doing health promotion work. They are Laura Cano, Belén Pérez, Marcos del Pozo and Carolina Moncada, all of them graduates and students of the University of Navarra.

The volunteers traveled on July 6 to Vistabella, located in a mountainous area surrounded by volcanoes, to collaborate with FUDI (Fundación para el development Integral). They stayed there until July 31. This institution, which has three centers, promotes the empowerment of families -especially in rural areas- by offering training and support to improve their quality of life. The young people from Navarra collaborated in one of them, called Aq'on Jay (House of Health), where they work in several programs of primary care, child malnutrition, improvement of the sanitary conditions of the families, etc.

Laura Cano, graduate of the Economics, Leadership & Governance program from the School of Economics; Belén Pérez, graduate of thePsychology; and Marcos del Pozo, graduate in Audiovisual Communicationcollaborated, from their disciplines, in the project "Acompáñame a crecer", whose goal is to create an early stimulation center for children at risk of malnutrition. The three went house to house in the area's villages, surveying families to see who could benefit from the program. They also helped with the installation of wood-burning stoves (to avoid smoke inside the houses) and helped with administrative issues. 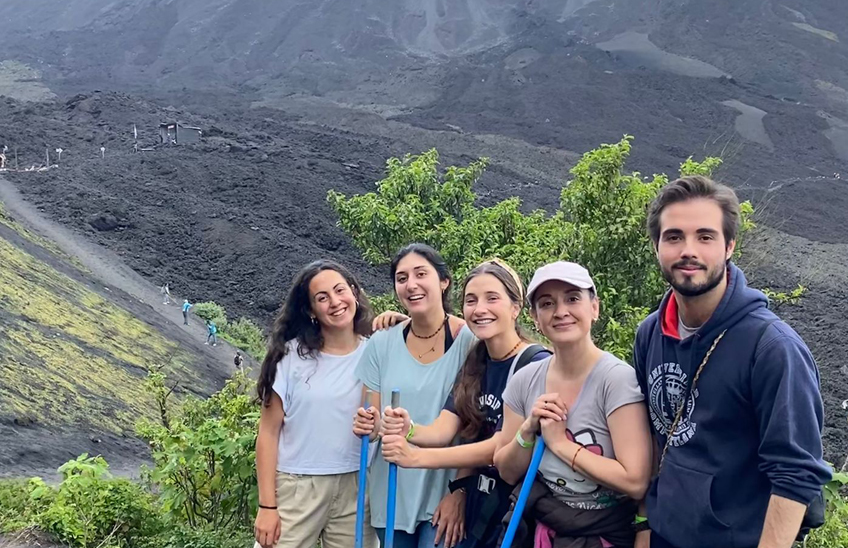 On the other hand, Marcos, who currently works in Communications at the Foundation, photographed and recorded images to help the Foundation with its promotion. Clínica Universidad de NavarraThe Foundation, photographed and filmed images to help the Foundation with its promotion. "A professor recommended the experience to me last summer and so my curiosity was piqued. However, the main trigger was my desire to do something useful that could have a positive impact and this cooperative experience has been the perfect way to achieve that," he says.

Carolina Moncada, a 6th grade medical student, attended the Foundation's primary care center, went to . Medicineattended the Foundation's primary care enquiry ; went to medical conference to the surrounding villages; and gave talks on family planning. "I was going to be with a doctor, but he retired, and in the end I worked alone with the nurse. I learned a lot, especially how to practice medicine without tools. All I had on hand was my phonendo, a blood pressure cuff and a thermometer. There were no imaging tests or blood tests. But sometimes with a clinical eye and a lot of study you are able to treat diseases, as was done here a hundred years ago," explains the student.

Carolina wanted to make the most of her last long summer. "I have done more volunteering, but I really wanted to travel to another culture, where there was real poverty. It was very shocking result and I still haven't had time to assimilate everything I've learned. There are huge inequalities, not only between rich and poor, but also between women and men, between girls and boys. Girls who leave high school at the age of ten to help at home, who get married at 15 and become mothers at 16", says the medical student. In this sense, the experience has helped her to appreciate living in a society where, she says, "as a woman I have the opportunity to do what I want, to work in what I like and to be valued".

Carolina does not rule out returning in the future. "I would like to be a gynecologist and I could do a lot of work for the women there. The mothers of these families, many of them very young, devote themselves to their children, who are very well cared for. The fathers too, because they are the ones who bring home the money. But no one takes care of the mothers. The most serious pathologies I have seen have been in them, especially gynecological ones," she says.

From this experience, Laura, Belén, Marcos and Carolina also take with them the people they have met, not only the other volunteers, but above all the people who work at the Foundation. "They are examples that I take with me forever: they work with all their heart, with all their love for their own communities. Among them, the nurse I worked with or the Foundation's General Manager , who took us on weekends to get to know this area of Guatemala".

The academic year begins at the University with more than 9,300 students from Degree

María Iraburu, Rector: "At the University you will find the context to make your professional dreams come true and open new horizons".

The University is the second best in Spain according to the CYD ranking.